Good news for anyone who was not able to get to our webinar last Thursday.   Steve Shannon has posted the text of his talk on his website, Exilies in England.

It’s a must read.   Steve  had us gripped from his opening sentance: “And I’ll being with a meeting in Newcastle on 6 June 1922. A meeting that lay at the very heart of what happened on Tyneside, in the difficult months that followed.On that day, the Tyneside District Council of the Irish Self-Determination League of Great Britain – the ISDL – met in the Trades Hall in Newcastle’s Clayton Street. In the chair was Richard Purcell, a 39-year-old Irish-born former coal miner living in Gosforth, who had only been released from Dartmoor Prison some ten weeks before”.

He went on to introduce us to a range of local people, including a number of formidable female activists.    I may not have known much about them before but they are now locked in memory!

You can read the whole thing on his site

The Anglo-Irish Treaty and Irish Nationalists in the North East of England. 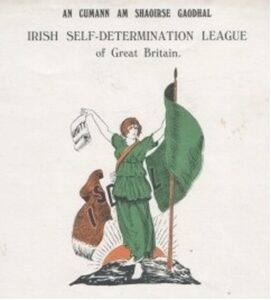