Brigit of Kildare by David Burke 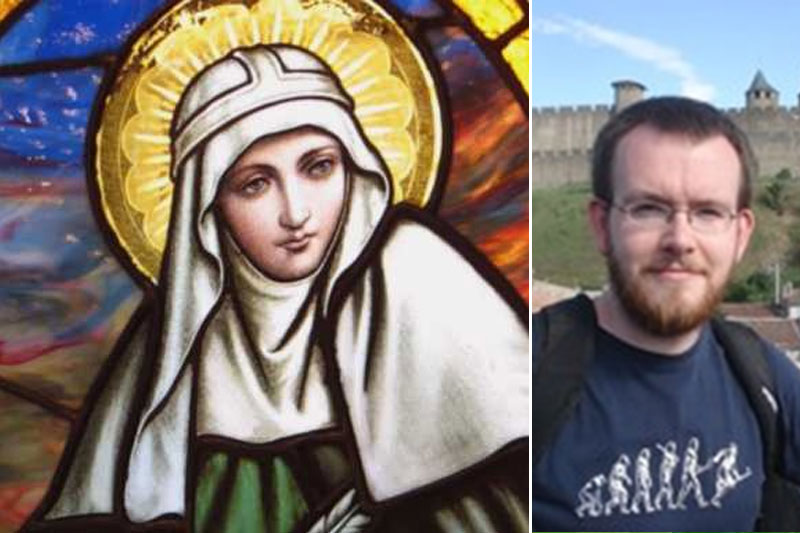 Brigit is the pre-eminent female saint of Ireland, standing alongside Patrick and Columba as the most well-known and popular of Irish saints. Indeed, the Liber Angeli ‘The Book of the Angel’ (produced by the Church of Armagh in the late 7th Century) refers to Patrick and Brigit as ‘the pillars of the Irish’.

Though the Annals disagree over the dates of her birth and death, it has been proposed that she was born in 439 and died in 524, making her a young contemporary of Patrick.

The earliest sources which discuss Brigit’s life date from over a century aer her death. In the late 7th Century, she was the subject of three Vitea ‘Lives’ (a specific genre of religious writing which recounts the lifetime of a saint from birth to death, and all the miracles they accomplished). The two earliest ‘Lives of Brigit’ are lost to history. The earliest surviving text was written by Cogitosus of Kildare, c.660 AD. About a century later, the ‘anonymous Life of Brigit’ was produced.

This appears to bring together three separate documents into one (very long and repetitive) narrative about Brigit. Part of it is clearly drawn from Cogitosus, and there is a theory that the rest may in fact be the remains of the two lost Lives. In any event, these two documents explore an interesting and often surprising character. Brigit is revealed to be a very determined and independent woman. She is a precocious child, selling her father’s property as alms for the poor. As a teenager, her father tries to marry her off; she prays to God to aid her, her eye bursts and fluid gushes forth, setting the young men to flight (don’t worry, God miraculously restores her eye!). Her father relents and allows her to join the Church. She meets with various other saints on her travels, including Patrick, and founds Kildare.

Aside from traditional miracles of plenty wherein she produces implausible amounts of food, she also finds the time to free men from unjust death sentences, provide marriage counselling, save servants from cruel masters, resolve land disputes, foil cattle rustlers, settle a paternity dispute, and provide violent hallucinations to groups of savage men to thwart murders (one of her stranger miracles). Far from being a demure and retiring holy woman, Brigit was highly active in her wider community, helping the poor and the infirm, fighting injustice, and supporting people through difficult times. She doesn’t appear judgemental but neither is afraid to stand up to kings.

The Brigit revealed in these texts is an argument for compassion and empathy retold across the centuries.