MEMORY WILL NEVER FADE ON TYNESIDE 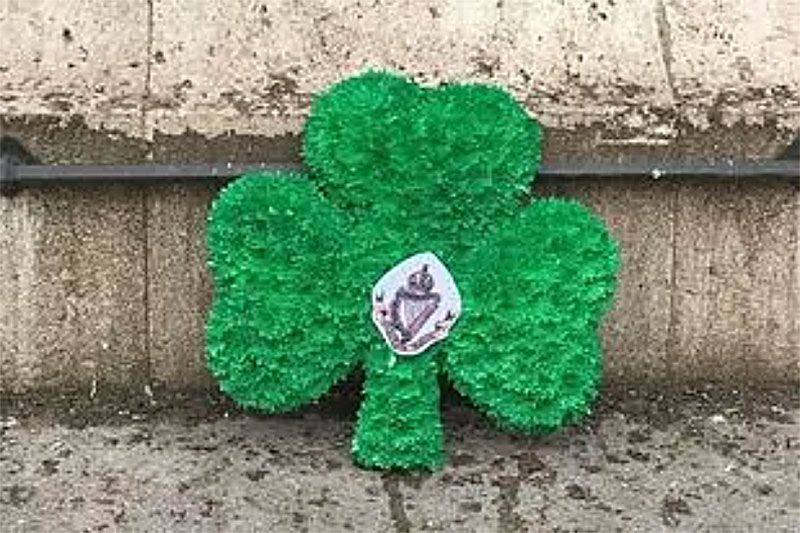 This was the famous pledge made by Father George McBrearty, chaplain to the Irish Brigade of the Northumberland Fusiliers, at their first memorial service in 1919.

For four decades after the veterans remembered the almost 1500 of their comrades who made the supreme sacrifice in the first world war. Every St. Patrick’s Day, after prayers and a parade from St. Mary’s Cathedral they laid a shamrock wreath at the War Memorial in Eldon Square.

In 2001 the tradition was revived by the Irish community in the region and they have been joined by Fusilier veterans and relatives of many of the soldiers of the four battalions of the Tyneside Irish Brigade from as far afield as Cleator in Cumbria.

This year Covid prevents the gathering but the wreath will still be laid at one o’clock by Tony Corcoran, secretary of the Irish Centre in Gallowgate. “We don’t want to let Father McBrearty down now”, says Tony. “It will be laid in silence and without spectators but the images of it will travel out across Britain and Ireland and to the many corners of the globe where the 5,000 brave men of the Brigade are still remembered.”

“There is one small problem”, he adds, “there is no shamrock! For the first time in over 60 years our florists cannot get the iconic trefoil. Growers in Ireland told us that Brexit tariffs and bureaucracy have posed insurmountable obstacles. Not to be beaten Katherine’s Florists in Newcastle have designed a spectacular alternative. We are delighted with it.”

The Tyneside Irish Cultural Society (TICS) launch a remembrance project backed by a grant of £10,000 from the Heritage Lottery Fund on April 1st.  Its aim is to collect memories and stories from descendants of the Brigade and preserve them in digital and archive forms. Organisers are keen to add to the fifty contacts they already have and will help descendants find out more about their ancestors.  The project lasts for a year and it is hoped that by St. Patrick’s Day 2022 a major touring exhibition will be staged in the region.